We are Covid Secure and REMAIN OPEN to treat you safely.
Please call if you’d like an appointment.

The chilly weather at Pretsbury Park wasn’t enough to keep the race-goers away from Cheltenham’s biggest event of the year – Cheltenham Festival.

It’s no surprise why, as the 4 days of the event were thrilling. Attendance figures for Gold Cup Day alone stood at 70, 242 whilst the overall event welcomed 260, 579 people, bringing over £100 million to the local economy. As well as enjoying each day’s races, race-goers soaked up the amazing ambiance and panoramic views of the festival from the new £45million Grandstand.

Gold Cup Day saw an Irish win, with the favourite Don Cossack taking 1st prize. Veladrome Olympic Gold medallist Victoria Pendleton made her debut at the show, coming in at 5th for the St James’s Place Foxhunter chase. She received praise from the BBC’s Clare Balding who described her as ‘unbelievable at dealing with the attention, the pressure’.

St Patrick’s Day attracted attendance figures of 65,544 with thousands coming over specially from Ireland. The Ryanair World Hurdle was won comfortably by Thistlecrack whilst Tom Scudamore was crowned champion three-miler. St Patrick’s Day is famous for its celebratory atmosphere and this year was no exception, with a sea of green descending on the festival site.

Ladies Day was particularly memorable for us at Arden House this year as our very own dental nurse Charlotte Hamilton won 3rd Prize for the prestigious Best Dressed. Charlotte is something of a local celebrity, being pictured in our local paper! This was not Charlotte’s first time participating in this category, having won the competition several years ago. After winning 3rd place this year, Charlotte said:

Call us bias here at Arden House, but we reckon she deserved 1st prize! 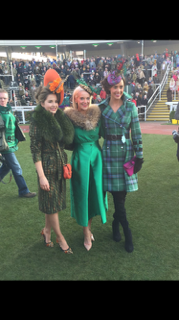 A couple of stats from last year’s Festival include: